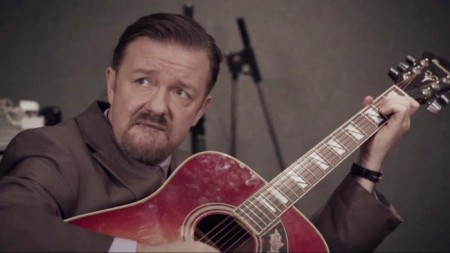 ****Ruckas Videograbs**** (01322) 861777
*IMPORTANT* Please credit YouTube for this picture.
28/02/13
Grabs from a teaser trailer for the return of Ricky Gervais’s hit comedy character David Brent in ‘The Office Revisited’ which has been made for Comic Relief. The Office Revisited will be aired on Red Nose Day on Friday 15th March 2013 on BBC One and see’s what Brent has been up to ten years on from The Office in the one-off special. In the trailer, we see Gervais putting on his David Brent suit before we learn that Brent is now a music mogul (or so he believes) and is trying to promote his political reggae song called “Equality Street’ with rapper Dom Johnson (played by Ben Bailey Smith, who appeared in Derek on February 27th). We see Brent relaxing in the studio with his guitar, trying to sing his song while Johnson and another character (unknown) look on in bewilderment.

**IMPORTANT – PLEASE READ** The video grabs supplied by Ruckas Pictures always remain the copyright of the programme makers, we provide a service to purely capture and supply the images to the client, securing the copyright of the images will always remain the responsibility of the publisher at all times.
Standard terms, conditions & minimum fees apply to our videograbs unless varied by agreement prior to publication.